Shaman is going to be the first supportive character in the game that is mainly meant to heal others. For sure he will be fast and able to pick more than one potion. His attack is probably going to be melee. 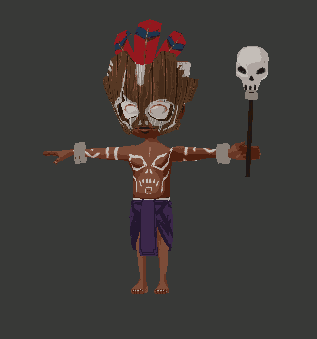 Perhaps his special could be an aura of healing. He would have low health, and a slow-recharge ranged attack with low damage. He gets points for healing.

If you introduce a healer into the game, can I suggest you make health potion drops by gremlins far less likely? Maybe only a quarter of the time or less?

A healer would promote teamwork

If there were some visual indicator on the mage to show when he is ready to heal, it would create an interesting dynamic with teammates knowing when to huddle around the mage, and when enemies would want to kill him.

I really like the idea of having an 'engineer' class (kind of): His special would be to drop a 'ward' that would zap enemy players within a radius, slowing them, hurting them, or poisoning them etc if that get too close. His normal attack would be a weaker long-range attack

maybe the shaman floats instead of walking (not affecting hitbox)

For his special he should have circle which heals everybody inside it to full health. Instead of kicking/blocking/ maybe he could throw slow/poison potions with a bit of a cooldown.

so it going to have a 2 hit = 1 hit? so he can swing faster and can`t block ? may be poison status? oooh! this is evolving in to mmorpg ! xD well if i play with him/her, i`d like to have no kicks, but insted a hit that make you stop but with no damage! does it sond good?

Shaman's moves other than his LMB move should give your team mates buffs.

LMB: His LMB would be a standard melee attack doing one damage.

RMB: His RMB would work like a mine, meaning that you put down your staff and make a circle like the mine does and it heals all team mates for two health once.

MWUP: His MWUP would do the same thing as the healing circle, but gives your team mates a damage buff that multiplies the damage by two and the effect lasts up to two attack moves.

MWDOWN: His MWDOWN would again, work like the healing circle, but gives your team mates a temporary speed boost.

RMB+MWUP: His RMB+MWUP would be able to revive any team mates on the screen, but they lose their items, but don't get their score taken away.

The only reason i see this being bad is the revive since you have instant respawns otside of competitive so instead of a revive how about a Full Health Heal that, no matter what class or hp you are at restores all your hp but unlike other classes this has a slower recharge (like extremely slow) and makes it easier on rezonor because less coding

Has pay to grab?

Shaman´s can drop a medkit

Shaman's use spiritual methods of doing something, dropping a medical kit wouldn't be really shaman-like.

he cans heal just team by wheel up, revive team (higth mana cost) by left click,drain life for himself by right click and poison potions for other team

the shaman should be fast and able to dodge attacks with speed. he should have a low damage staff attack say 1 damage and no special attacks. i think he should have 6 health. his moves could be right click and hold to summon up spirits which deal damage to any enemies in a radius of the shaman. this move would have a long cool down and the shaman would have to stay still. on a forwards scroll he could releases spirit from his staff which seeks out the closest friendly player and flies threw them healing them by 3 hp. on a backwards scroll any friendly players in his radius gain 1 health per second. on a forwards scroll and right click he holds up his staff and blinds all enemies in his radius for 3 seconds this would have a cool down.

really i think that he should be like a spirit shaman.

the shaman should constantly have a radius that increasingly players running speed a little and a tiny bit of health.

This is sounding more and more like Overwatch Lucio

I say he should have a slow health regen, and he has a special that allows him to fire an arrow, which will leach health from his target to him, like in hordes.io.

OK first his obvious turning point ,healing.It should be where his(EDIT) hp potions have an AOE and when he uses them not only does he do the standard heal to himself, but teammates get a plus 1 to their hp if close enough.

Second his attack would be a standard hit/ swing of the staff and does 1hp seeing as he is a healing character and not the Bezerker or Grunt.

His MOUSEWHEEL+CLICK shoud give him one free health potion so he wont have to go searching and he can heal up his teammates.

His F should be something that i think would be pretty cool, his skull from his staff comes off and drops a Bomb,when the action is done this puts the Shaman in a vunerable state since he cannot heal himself fully or others at all during this time when in the No Weapon State (N.W.S) potions should only give him one hp and not heal teammates , which really makes his (yes this is the only reason i wanted this added is because of the name) F-BOMB a real emergency use unlike others who can comeback from using it.

-killing an enemy DIRECTLY gives him a hp potion

-heals one HP every 6 seconds

Have when the Shaman kills someone, the body comes back to life as an AI skeleton that fights for the Shaman.

Another Idea is that if someone falls into a pit a flying bat AI is formed.

What would the bat do? And nice graphics, too.

if you are going to make a shaman i would recommend that he CANNOT heal himself, he can only heal others but he can heal himself with red potions and healing orbs

I dont like this idea. Its kinda boring. The whole point of this game is to hacknslash isnt it?

I have 2800 coins rn to save up for a nice good class. Wouldnt want to waste it on a class that just heals.

WHY DID YOU GUYS BUMP AN 8 MONTH OLD POST

STOP DIGING OLD THREADS! *Oh i forget you are MiNICryfter.*

We could make the shaman be able to use bones to make undead warriors which are shot, can be healed and are AI

This thread is older than God... why bump?

+2
I EAT RULES FOR BREAKFAST 5 years ago

Marked as planed but been forever now. Don't you think?

So, how's the progress?

my thoughts on the shaman: meh

He forgot about shaman ;)

im feeling... old being in here

Well its an old myth that he will be added ,since Rezoner added 2 slots for potions and 2 slots for explosives ,swords and hooks there is no point  adding him ...TwT

-trees (well only axes can cut them  now)

-what will be his attacks? (if he ever gets added)

-Maybe you can add his special power to be healing multiple pepole at a time?

-Maybe he can throw potions and heal multiple pepole at the same time but heal 50% less than healing a one person?

1 whole year in a planned class that aint here..

oh that bump though lol

Has this idea been forgotten or is it still in development?

We dont need a shaman, we dont even have ranked 3v3 and ruins is not that competetive

So...this idea has been cancelled?

I know this has been planned for a long time, but can you give an update or a release date of when the "shaman" is gonna come out.

The shaman at this point has been put to irrelevance. but I will just add something since if possibly the sprites and movements for the shaman (sprites) are done we could just make the shaman an npc or a monster/boss just a suggestion or possibly just add a weapon that enables healing

This post isn't even being considered anymore. Please do not add any more comments

I am 100% with Storm, everyone stop commenting on this post please.

Fuck off you little shit.

Probabily he have fun when he bump an old post

Everyone is child at heart,they say.Well not gonna be me.

okay king now ur asking for a roast sess

I'll get toaster from my house. I'll be back in 5 minutes! *goes to his house*