Sickle as weapon - question for players

Hey, in last time i saw many suggestions about possible new weapon in wilds. Because in wanderers.io exist sickle, many players want this weapon also in wilds. And here is my question for you:

How do you see this weapon in game? I mean amount of dmg which this weapon can deal, range, speed, type of charged attack and special ability. You write your ideas about stats which could have this weapon, and also try make it balanced. This give more chances for add this weapon to the game, when we have suitable and balanced stats to the game.

Btw. in last days i got ability for mute/ban people in wilds, so please if you have some problems, someone is flaming or trolling in the game or just is rude, do not bother Rezoner about it, and call me. I will try solve this problem fast as possible.

well fallowing the Scythe in game it would be cool to have it be in wilds alright, basically you can do a
damage: about axe or less
speed: hammer or little faster
special: sort of like a fast cut 360° that takes same amount that all specials do but with knock off effect
throw/charged attack: standart
cut crass?: cant, no grass in game (yet, if you know what i mean) 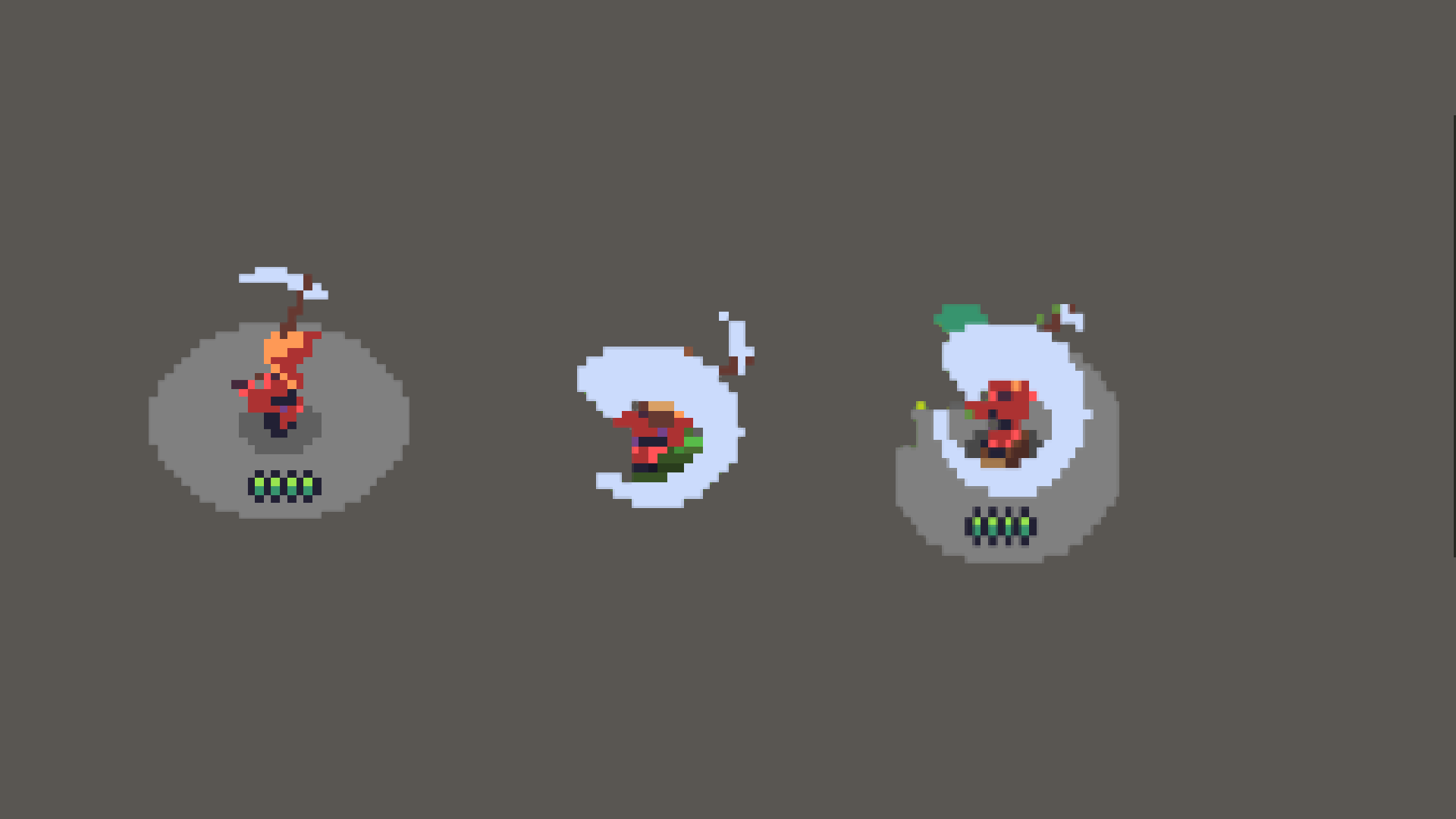 you stole my idea for its special ._.

Like the sword special? I think that should be it's charged attack, and the special...Idk yet

No, its a fast spin with a cool animation, nothing like the sword

Oups sorry i said it in french .This weapon have a grab for special who knock out 1 second charge attack is fast and have a big range but you can't move when you do that the weapon can do 1,5 or 1'75 damge with a medium range. x) 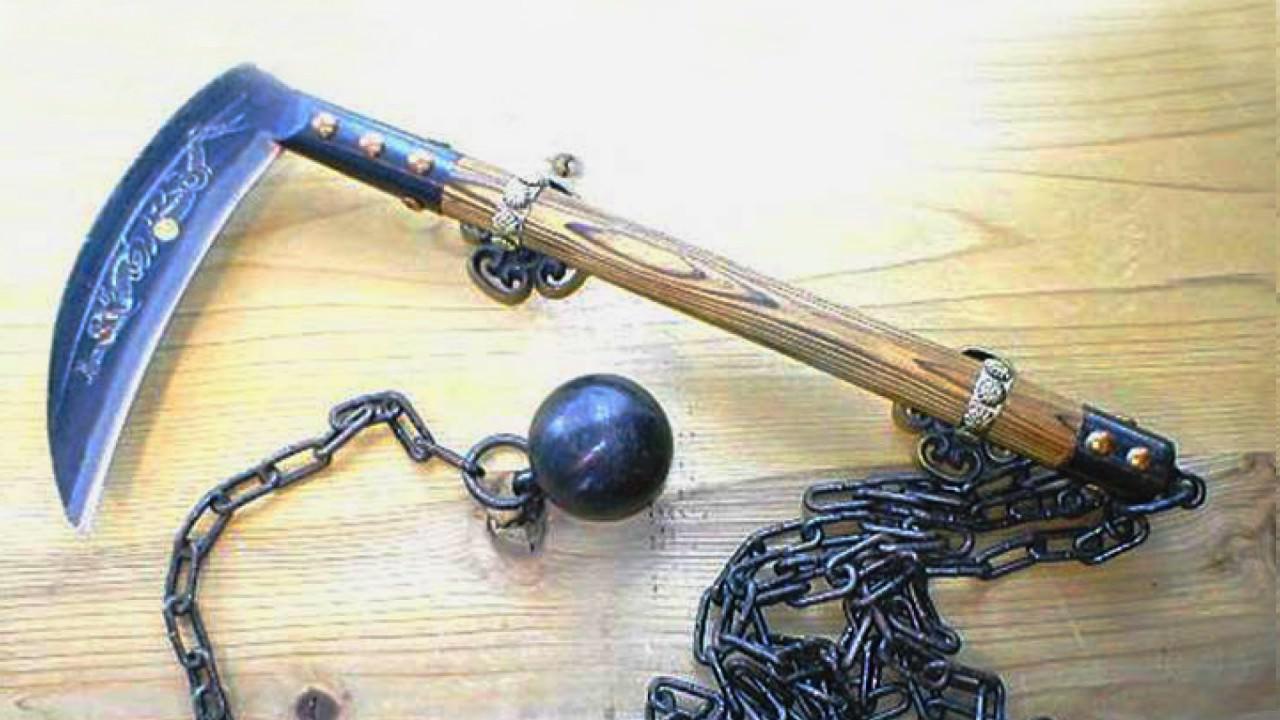 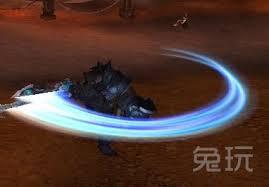 Normal attacks: Slash left, Slash right, and Slash down. Each successful hit is 1.5 damage. The speed for the scythe is a bit greater than the Axe.
Charge attack: A 180° slash that knocks all enemies in front of you down, dealing 2 damage. It has medium knockback.
Special attack: The player raises the scythe high in the air and slashes down dealing 1.5 damage. This attack does damage to players even if they are knocked down. It has very little knockback.

i like it all. how about special consisting of the grunt jumping and doing 3 quick frontflips with the scythe, each of them dealing 0.5 damage and being able to hit knocked down enemies?

or maybe just one frontflip with greater damage. i just want the flip for epicness

who downvoted my idea and why

Hmm.  Well, it depends on what type of weapon we want the sickle to be.

For Arena it needs to either be able to be good at applying pressure on an opponent of have a strong hard to dodge damaging special.

I think that the sickle should be in the middle leaning to the damage side of of damage and a strong special.  We already have claws which has a super strong special and does little damage,  hammer which has the ability to apply pressure dealing 2.5 damage, and sword well, which is kinda unbalanced.  I think the Sickle should deal 1.75-2 damage with an attack speed of 0.45(sword does 0.3 attack speed hammer does 0.6 attack speed).  The range i believe should be the same as hammer because it is a more aggressive weapon.  I think the weapon throw should be normal because the weapon will need to do damage.  The spear throw failed us doing only 2 damage.  I also think that the charge attack should be normal too, why? I dont know i dont really have a strong opinion for what its charge attack should be.  For the special i think that your character should dash forward and swing dealing 1 damage but healing you .5 hp.  The damage radius will be 270 degress.  Maybe to not prevoke running the weapon could cause the player to move slower.

For fort well, depends on your playstyle.  Or just have a grab like what Raph said.

Not sure about this idea but idk

How about a normal attack the same speed as axe, but dealing a little less damage.(still more than claws and spear)

But then the charge attack(which would do the same amount of damage as the normal attack) would charge up a lot faster than normal and would make you move a little faster.

And the special should be pain's idea or a 180 sweep that knocks people down and does axe damage. Blocking it stops the damage, but you are knocked down. Rolling makes you damaged, but you are not knocked down.

I was thinking that it'll have about the same stats as the claw or the spear...

It's special could probably be just multiple fast attacks onto the enemy. (Only sickle variant).

This could be like a hammer, slow attack speed with high damage...or you could go with the same stats with the claw, spear, or sword...

It's special could probably be an overhand swing that could either stun, knock, or just damage the enemy while bringing the player to your location with its scythe blade. (Only if the sickle becomes a scythe.

Not sure what will the sickle turn out to be if it gets implemented. There's currently 3 variants that could possible be with the "Curved Horizontal Blade On A Stick": Sickle Variant (Shrunk down scythe), Scythe Variant (Enlarged Sickle), Kusarigama Variant (Sickle with chain)...

Personally this is how i'd make it, though.

The grim reaper kinda sickle mind you, as I am aware there are different ways to approach this.

Attack Speed: Questionable axe speed to compensate for the special.

Charge Special (this is subject to change, don't hate pate):  Because of the curved nature of this blade, the charge attack can go through block, and the charge acts just like a normal charge attack as well, not something like a fixed animation like the spear.   Mind you, if the person blocks the hit, they take less damage than not blocking, but granted they will take 1 point of damage.   Though remember guys, you can also try rolling away, swinging your weapon to clash, or even kick (because I think to balance this out, the scythe/sickle charge should be kickable thus giving some fighting power.

This will promote players to think differently and find better defence strategies, maybe even get players more aggressive.

The Special: We have two choices, give it a little chain like the animoo people see, and make it to where the sickle/scythe does 1.5 damage on hit when you throw it but also if it hits, it pulls the enemy to you, it's blockable ofcourse. (Pretty much a more damaging infinite use rope ability, BECAUSE F*** RUNNERS party.)
Or, we can make it to where the character does a grab attack on hit and tosses the enemy away whereever the person points, doing 1.5 damage.  (more damage from hitting items I presume)

The throw could be normal, or we could have some fun with it and make it like a boomerang, throwing and hitting an enemy guaranteeing that it comes back to your hand, but if blocked, kicked, or dodged, it would simply not.   Also this does have the normal weapon return cooldown, even IF it came down, so you can't spam it.

I'm kind of late for writing here, but this is what I think:

Also assuming that the sickle scythe thing has a small sharp edge at the opposite side of the curved blade (because....reasons?)

Consecutive Attack (After 2nd): Spins wherever heck might be, .50-75 damage every .25 seconds. Can still run while doing it, but could be rather hard/slow ;d. Have to hold lmb. Drains quite a bit of stamina.

You can (but don't have to) hold lmb during all stages to quickly do all three.

Combo thing or whatever can be stopped anytime, any stage.

Shield can block all stages.

After .7 seconds after 1st Attack, default to first stage.

After .6 seconds after 2nd Attack, default to first stage.

Any action other than holding lmb to stop 3rd stage to first stage. Can still move while holding lmb.

Charged Attack: None, that's the point.

Knockback: Nowhere in sight with this weapon. 0 to little knockback in any stage or special.

Special: 0-99 or something stamina (no 2nd bar): Like a claw special (lunging forward with speed), but no knockback/fall for the opponent. 2 damage.

Special*: 100-200 stamina: Close ranged, does the Consecutive Attack. Can't be stopped with shield but damage can be blocked nonetheless. Lasts 1.25 seconds, does .75 damage every .25 seconds. Final spin does 1 damage (after 1 second) plus a little knockback. Drains 100 stamina. Leaves user dizzy for .30-.50 seconds after the special. 4 damage. (As if the special will ever do that much)

*: You can avoid using the special by using the Consecutive Attack during it to use the 1st one (doesn't matter what stamina). Or by just having less than 100% stamina. :l

Cooldown for Special: same as sword~ or other similar timed specials. If you used the 2nd special then it takes almost twice as long (or just 1.5 as long).

Thanks everyone for so much responses about possible sickle weapon. You had so much good idea and this will be really helpful. If you still have some ideas go ahead and post it :3

Just to bring something new to the table, what if each hit scythe make's  the other fighter closer with each hit?

It would make the fighting style a little diferent just cause in order to hit 2 times with the shield combo, you need to walk away and not closer like the other weapons.