Hello, it's short and simple idea but i think wand projectiles also should have ability to follow your mouse. Why? Because of the large number of missiles fired in a row, it is still difficult to hit someone, especially when player is moving at an angle.

I noticed that while standing at a distance from the target, missiles often did not fly exactly where they were aiming. They only get there when I make a correction by moving.

Controlling missiles can fix this problem, and also improve the game with a wand because where is the sense, when after firing dozens of missiles, only one or two reach the target?

In my opinion it is funny that an archer can control shots when the magician is not able to do so. :D

To prevent this weapon from gaining too much power, the control over the missiles may be less than in the case of an bow, but I think even with the same control of the bullets as the arrows, the weapon will still be balanced. You can always reduce the control of missiles at any time.

With this reason i suggest first add the same control power over the projectiles as have arrows, and decrease it if we see this is too op. 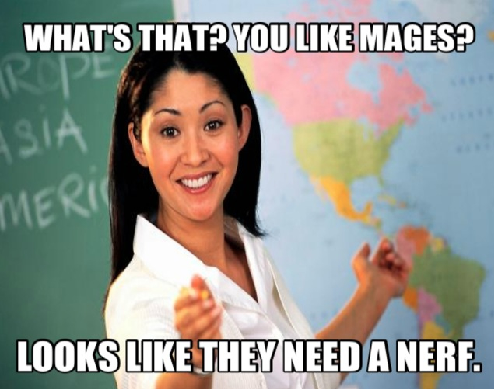 what if you only can control the special?

Well now only thing what we need is Rez opinion :p

I feel like it's balanced now. Guiding the arrow works because there is only one arrow at a time. The ice staff fires many projectiles at once. It's already easy to kill people if you have a couple of clones. And if the caster is moving, and you kick back the projectiles, it's impossible to hit the caster, since you can't guide the bolts back at them.

Problem is when you shot at far distance. Try stand in one place and when you shooting, you notice the projectiles not always fly where is your cursor. With small controll power player can fix the trajectory when shooting at far.

Also bow is much stronger than wand and i can show it in real fight. Sure bow shot one arrow at time to time but dmg is good and great trajectory controll make this weapon more accuracy, which also need wand as ranged weapon.

And i tell only about staff because for example on pvp you not have items.

Good point. It's hard to hit with wand projectiles right now, and guiding them will make it better. Nice meme by the way ;)

how is your posts so good XD

Well before I add a post I try to make sure my idea is good and also try to support it with the right arguments. Also, I want posts to look nice and neat. I think that's all :3

Just revisiting this I seriously feel it needs to implemented bow is just way better. The speed and the fact that shield COUNTERS wand is just ridiculous including kick with bow the arrows are faster and shield doesnt counter it. (Yes I know shield counters both but im looking at the perspective of a Player and half of the projectiles miss too).

Shooting at wand with min. 4 clones is like... shooting from Uzi without aiming XD