Hello everyone! It was long time when i posted something last time, but soon i will be again more active on userecho, and also i will be back in game. So i have idea which can be not only cool in several ways, but also can make possible bridge, for tons of new things whitch can be added to the game.

My idea is about adding to the game grass instead of sand. This can add to the game something what all players want - new type of biome.

This idea is good in my opinion, because we can have now something like seasons, or on diffirent maps, we can have two biomes, instead of sand everywhere.

And how grass could look in the game? Here is the example of much smaller sprite, but it have very similar graphic style to the grass whitch can be added to the game:

Also i can say this idea already was in progress in last month, but i started working with graweyard sprites, and actually i have done 50% of new grass tile for wilds. And because it's 320x320 pixels, it's take so much time for draw it.

But i can finish it soon, so only thing which is now important, is what do you think about adding grass to the wilds? Also i can draw much more stuff connected with grass biome like bushes, bamboo sticks next to small lakes or tall grass where you can hide (like in league of legends [this idea was in my head long time ago, but SGT Pain reminded me about it, so thanks so much, and this is also your part of this idea]).

This also can add to the game more survival things, for example animals like deers, rabbits etc. or collecting fruits from trees. And this is only the top of ice hill.

Well, tell me your opinion about this idea, because it is always very helpful for me and Rezoner, and if you like it, you can share your ideas about new biome in comments. Soon also you can expect me again in game, so don't be suprised when you will saw army of monsters on the server :]

Cool! Glad you are going to be back egze :D

Are there pokemons in the tall grass?

Ask this guy which is on my avatar.

Me, i´ll ask a pikachu instead.

I think that there should be a forest map

On topic description you kept doing "whitch" except "which" but now you do it correct?

I noticed it also but it's mistake of my phone. Idk why he all time suggest me "whitch" Instead of "which". I  want edit that but someone was added comment what disabled me option of editing post...

So sand worms will become obsolete as well as ogres?

I don't think so. In my opinion both monsters can stay, and ogres even better fit to the grass/forest biome.

But sand worms can't be in grass because they would be grass worms.

Also, maybe we could create a cave that has ogres in it?

And for the sand worm we could have an eagle nest instead with the chest inside.

Yes, but this was very small sprite,  too small for use it as core graphic of the map. Also this grass have too much mess in pixels and it not fit to the graphic style which want Rez.

it looks great but pls dont replace all of the sand with grass ;(

You are rorugnak the barbarian :D

Go back to sushisling3r topic with ingame names.

This is really great in my opinion .

- Now we'll see some life put into the Maps / Game Modes . But I would not recommend replacing all areas of the Fort with those "Grass" because it wouldn't be as neat as you would expect .

How about the Ice/Winter/Snow theme of the Map ?

A Suggestion about the placement of Grass .

- It's good to have an area with Grass all over and another area with just ... Sand , but , I would suggest little amount of grass being placed on some of the Areas which would make it logically correct in some sort of way (I'm trying to make myself seem smart) .

Yea,its pixel art is sure a force to be reckon with.

Too much green - but it's ok

Same what i can say about sand - too much yellow xD

ikr? it's kinda boring, you know?

this would leave the mythical idea of the game somewhat to bring out a more realistic side, like animals, but that did not completely exclude the idea of new monsters related to this biome. +1

Grass don't must be everywhere. This can be used on several maps, modes etc. And we can have sand and grass in the same moment on other maps.

Grass is great as it is,but its up to Rez if he wants several parts in ggrass or whole thing,Im ok with that.

This would be great for a new map, and if you could add thin patches of it in fort, it would be good. You would have to work on the transition between grass and dirt (sorry for more work egzekuter)

Oh yas and is tytanow janusz still working with rezoner? I notice that he is still on forum from time to time, so he has not quit( I don't think ) sorry im just curious :)

I not have idea what is doing Tytanowy. Rezoner also don't know where he is ;_;

Great idea. This idea could branch into animals , water etc... It can also imploment grass animation , like perhaps someone dies , the grass around the dead player spreads in a way  (This idea could be really laggy) . You can even imploment full grown trees or make yetis look more like gorilas I MEAN THERE IS ALOT THIS UPDATE COULD DO !

My only complaint is making the game food/water based...in my opinion this game should be a fighting game , a skill game , A STRATEGY GAME.If food is a implomentment in the game it could destroy the whole factor of fighting and skill....

maybe there could be a different gamemode with totally different mechanics, i like the idea of a survival game

since starve.io attracts lots of players worldwide adding survival mode would do the same to the wilds

Im working on how the grass should look more detailed, soon i i will finish my work.

show us what have you done

I know, it has been bad and too simple but I will try to do something similar but better. I dont like it. 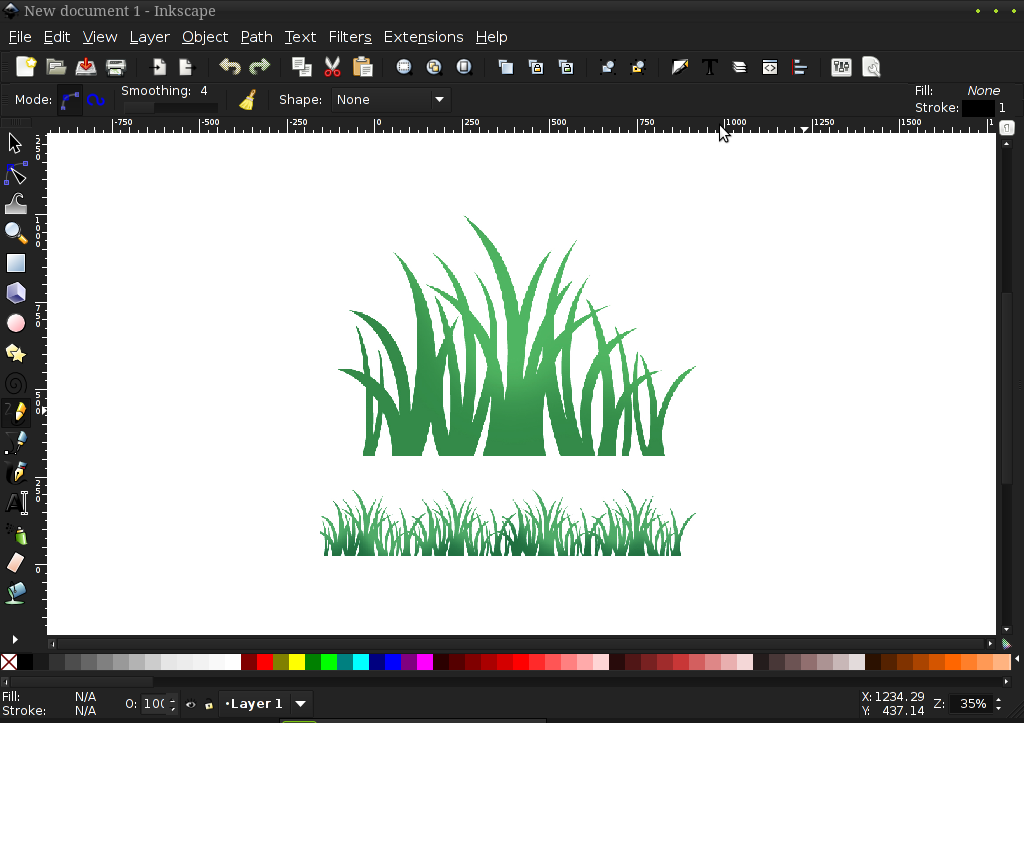 Try to place Grunt beside this big version of grass XD