I like the new update, but there are several things that I think can be improved. One of the main problems that I see is that people will start using the spawn doors to avoid combat, or if they're low on health, will go back in to avoid dying. The enemy should be able to go through the doors to chase someone who is running away, however, the players that recently spawned, could be invulnerable. Once they leave the room their invulnerability will disappear. This should fix the problem of spawn campers, but also fix the problem of people avoiding combat or running away due to low health.(изменено)
I have a question, what do you mean by "2.It would be nice if these rooms were not boxes "
Are you saying that you don't want the rooms to be boxes? Circles instead? I don't understand what you mean by this.
Vote

"One of the main problems that I see is that people will start using the spawn doors to avoid combat, or if they're low on health, will go back in to avoid dying."

This is the point!

People were asking for these doors just for avoiding combat, sometimes they just want to chat in game.

I think adding 60sec cooldown after passing the door would fix the thing.
What I mean if you pass the door you cannot go back for 60sec (or more IDK).

About interiors - yeah, it would be very meta to have like a house where you sit down and chat instead of playing - not very healthy for the server and gameplay, but it's an interesting idea.

Well. Many players love to run away from the enemy, and then there's the protection of doors

For a add-on and build up on Rezoner's topic, feel free to read this: 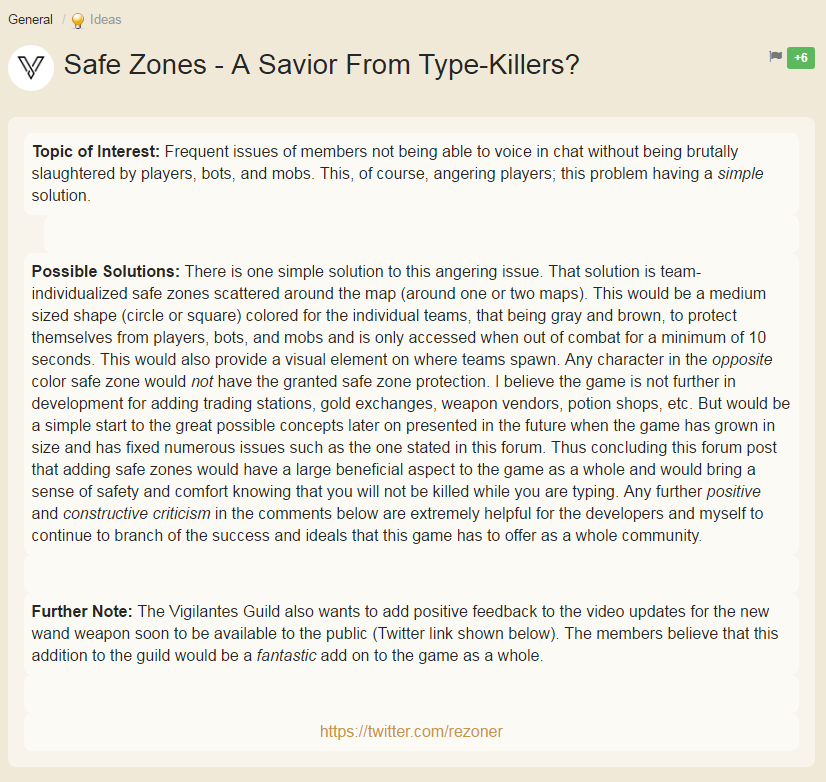 This post was made before the addition of doors were added to Ruins.

Ok but for real like its not that easy to just run away from battle into the doors. Too like theres a good distance away aswell theres dash but sure why not.

I see so much players in new ruins with bows, and they only camping next to spawn. It's hard to kill them because all other teammates protect this campers, and when you try to kill one, he fast run in to spawn. Sometimes it is very annoying... I think the save area with cooldown is a very good idea.

How about hurt players can't enter the doors?