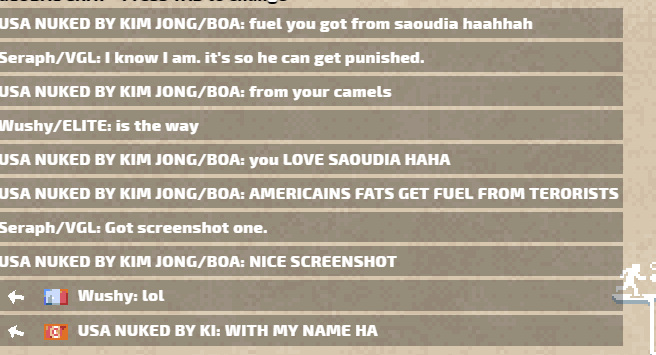 As you can see from the pictures above, this kid thinks he could troll, but he's gone too far now. he is being very rude. It first started with a slight grudge, then turned into.. this. He's been turning on other countries also.

Their name on the forums is currently unknown, but we can't have behavior like this plaguing wilds' chat. I'd like Rezoner to take action about this. They have truly lost their mind "trolling".

and he keeps saying "TRUMP CHILDS" and "FAT AMERICAINS" like he knows his shit.

It's time to stop this kid. He's gone too far, I say again. All from a grudge.

P.S. Give this kid a lesson if you see him, please. he deserves it.

There isn't a proper label, so..

WE WILL NOT TOLERATE INTERNATIONAL AND NATIONAL INSULTS!!!!!!

HE DESERVES IT, THAT KID!!!

Sarcasm noted. Or are you truly being serious? We may never know, for this is the internet, after all.

I know this guy, in april he was talking the same but he got other nick. I didn't report him, and now I regret this.

he have 8 years if u no know