% Health rised from 6 to 8
% Hammer:
* deals 3 damage in front
* deals 0 damage in circle but falls enemies down
% Sword:
* deals 2 damage in circle
* push enemies further instead of falling down
% Counter-attack (after successful block) does not cuase enemy to fall down
Vote

From what I've seen you can still lob with the hammer, but not with the sword.

Must be a bug.

this makes me feel dizzy, seriously

How does that work? I still have my chrome zoom at 67% and I can see almost the whole arena court, for example. I tryed setting it to 100% and look: 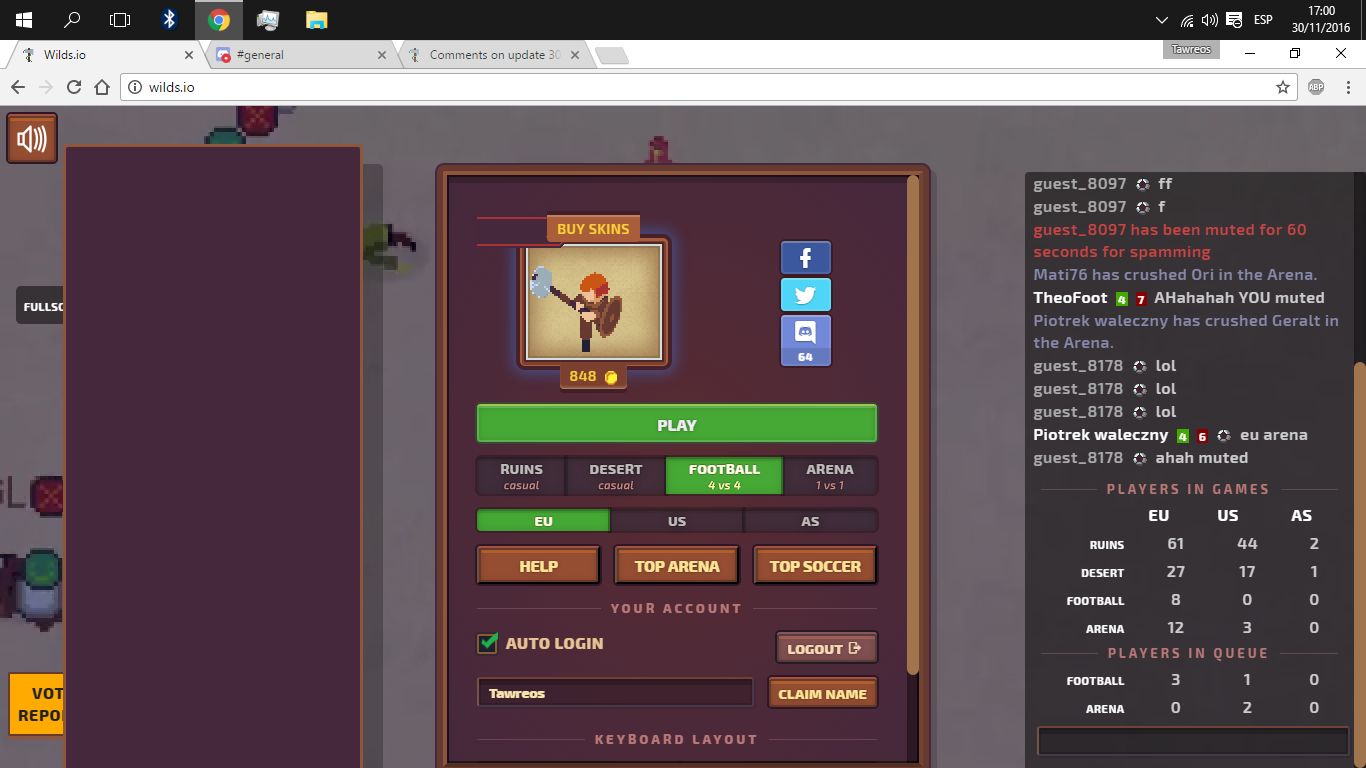 The scaling update does not affect GUI. It's related to in-game camera.

I am removing that. It was stupid move - I thought it's not fair but I have realized that everyone has access to zooming their webpage so it's not really unfair.

Too many health orbs/Health orbs do too much.

Perhaps have a health bar type thing above the stamina that fills as you collect orbs and then you can use is to give yourself a health potion or something. I think 2 orbs per hitpoint is right, 1 orb per hitpoint is too much sustain for kings who can get a quick kill on a n00b and get half health back.

Just reworked whole health stuff for your comment :)
Orbs now give only 0.5 health - and there is a new health bar that shows last damage.

But I think the update might have opened up a bug. I was signed out for whatever reason and when I clicked "sign in with Facebook," it temporarily opened Facebook, closed it after 2 seconds, then the Wilds.io menu just darkens and I can't click anything. Plz fix.

Actually, judjing by the menu chat, no one can log in. This should be fixed ASAP.

Ok Rez I LOVE the newest update, as in LOVE!!! ONE small fix, however: when you pick up a health potion, if you don't already have one and you're hurt, you shouldn't have to waste the potion just for a little bit of health. Instead, it should just go to your inventory.

I don't understand the different weapon balance changes. Does the Axe get any stat changes? With the difference between in front and on the side attacks, does this only apply to a certain attack animation????????

Nothing has changed regarding axe. Only hammer and sword got more balanced.

Ok nvm I understand now. I love the changes, but one problem, perhaps an oversight:

On a successful block, because the counterattack doesn't knock opponents over, it is easy to land 2 normal attacks while they are still stunned. This is a lot of free damage. Maybe you should change?

That's why I added 2 more HP.
Anyway it's hard to decide - because it was working like that before - and when I changed it people were disappointed because they couldn't do that combo anymore :)

Just in my opinion, you shouldn't be able to get more than one counterattack off on a single block. It makes blocking the whole game like it was before you changed roll. It just turns the game into "who is dumb enough to attack their constantly blocking opponent". Sure, you can try to roll, but 1 damage per successful roll is insignificant compared to the 4 and sometimes 6 damage you get off per successful block.

In fact, with the block-into-roll mechanics, it's now always best to block as an opponent stands up, because it they start to roll or don't attack then you can just switch to roll right away. Not saying this is bad, just saying it lowers the skillcap of the game.

but the roll infinte...

Is it just me or was counter attack removed rezoner? Like the oppenent gets stunned or dizzy (whatever). But like you can only kick not attack. i feel that counter attack is an important thing

Im noticing that hammer is more op then the sword, I don't understand how pushing the enemy back farther is really that helpful. I just saw that the opponent got more time to run. I think that the hammer should have the same damage as the sword. So the hammer should do 2 damage or the sword could get buffed to 3.

do you can do hammer back skill

as a JS developer I know how hard this can be, but maybe it's time for a new engine. The game is a lot bigger they it used to be, community wise and content wise. Just a thought.

True, but I wonder how much the game would change. I have just started getting used to the new mechanics, and while I still don't like them 100%, it would be a dissapointment if it was to change drsatically again.